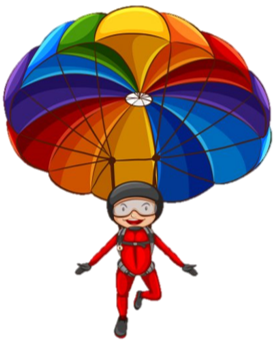 In this experiment we will see the impact of aerodynamics. Aerodynamics is the study of how air interacts with moving objects. The downward force that is pulling the parachute down is called gravity. When you raise an object from the ground, you are working against the force of gravity, which pulls it back towards the Earth. As you make your parachute, observe how the shape, size, and material of an object affects how it moves once it has been dropped.

Which material do you think will slow the fall of the parachute so that it remains in the air longer?

Procedure:
1. Take the plastic bag and cut it so it is the same size as your cloth.

2. Tie a piece of string to each corner of the square. Attach the string to a small toy that will be testing out the parachutes.
3. Be careful! Stand on a stool and drop your parachute. Record the times, using the chart below, for each parachute drop from letting go until it hits the ground.
4. Repeat steps 2 and 3 for each different material type you have.

‍What worked the best? What else could you try to make a parachute out of to make it stay in the air longer? Another force that will be impacting how slow or fast the parachute will fall is drag. Drag is a force that occurs when an object moves through fluid which can be a liquid or a gas. You feel this drag force when you move your hand through water, or through the wind. Like friction, the force of drag is a force that resists motion. For example, when you ride a bike, drag occurs between you and the air, and is often referred to as air resistance. The faster your bike moves through the air, the greater the drag force. So, when you ride a bicycle at high speed, drag makes the bike harder to pedal.

Air resistance is not the same for all objects. Objects with a greater surface area experience more air resistance. That is why an oak leaf flutters slowly to the ground, while an acorn drops straight down.