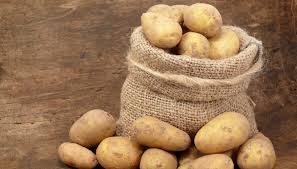 There are lots that can be done with a potato. From soup to french fries to hashbrowns, potatoes are a delicious food source that can be used in multiple ways. But did you know that these tubers can also produce power? Try out this experiment to get an idea of how batteries work and test out how chemical energy is turned into electrical energy.

In a battery, two metals, such as zinc and copper, react with a solution to create an electric current. In a potato battery, the phosphoric acid in the potato juice reacts with zinc and copper. When the zinc nail is inserted into the potato, it comes into contact with the acid and loses electrons in the reaction. These electrons are picked up by the copper in the potato. These flowing electrons create an electrical current. Viola! You now have a potato clock!

Expand on this experiment by using a third potato. Do three potatoes power the clock longer? Why might that happen? What happens if you boil the potatoes ahead of time? Try slices or halves of potatoes versus whole potatoes. Document your findings to discover different configurations for true potato power!