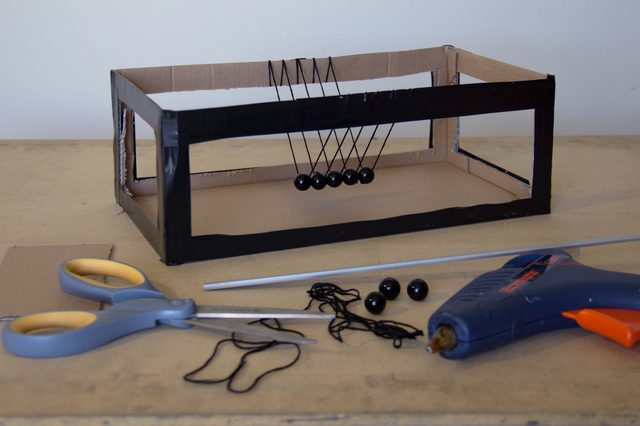 Stated simply, Newton’s Third Law of Motion says that ‘for every action, there is an equal and opposite reaction.’ Use a pair of roller skates and a ball to show how this works. What happens when you’re standing still in skates and then throw a ball hard? The force of throwing the ball pushes your skates (and you) in the other direction.

You can also demonstrate this using Newton’s Cradle. This apparatus consists of steel balls suspended on a frame. When the ball on one end is pulled back and then let go, it swings into the other balls. The ball on the opposite end then swings up with an equal force to the first ball, as shown in the illustration on the right. The force of the first ball causes and equal and opposite reaction in the ball at the other end.

Cut out rectangles from all four the sides of your shoebox. Leave about two inches of space around the top and sides so that you can attach your string to the Newton’s Cradle.

Measure out about 20 inches of string for each bead. Your Newton’s Cradle will vary in size, depending on how large the shoe box is, so cut a piece of string that is long enough to allow you to adjust it before gluing it to the box.

Thread a piece of string through each bead; loop the string back through so that the bead is held firmly in the middle of the string.

Measure the length of the shoe box used for your Newton’s Cradle and hang one bead across the width at the center, attaching the ends of the string to opposite sides of the top of the shoebox. Measure the width of each bead and mark that width two times on each side of the center bead’s string ends.

Attach the remaining beads to the Newton’s Cradle so that all five beads sit in a straight line at the same height and are touching one another. Hot glue the strings to the box so that they will not shift from where you attached them.