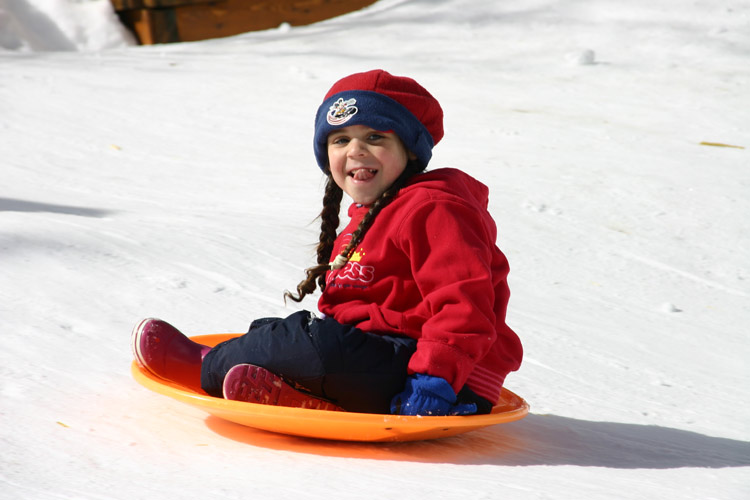 Will it snow this winter?!  If it does, have some fun and learn about physics (the study of matter, energy, and motion) firsthand while you have some fun sledding!  But don’t let a lack of snow stop you either – you can observe some of the same principles at work on your local playground slide.

Go sledding and think about the following questions:

Sir Isaac Newton was a scientist who studied physics and came up with several laws that govern motion, now known as Newton’s Laws of Motion.  Newton’s First and Second Laws of Motion are described below.

Newton’s First Law, the Law of Inertia, states that an object at rest will stay at rest, until acted upon by an outside force.  When you sit down on the sled, you and the sled are objects at rest.  To start sledding down the hill, an outside force must be applied – someone must push you off, or you must push off.

The Law of Inertia also states that an object in motion continues in motion with the same speed and in the same direction unless acted upon by an unbalanced force.  Once you’re moving, gravity is a force that pulls you down the hill, and you start moving faster.  But eventually, outside forces will stop your sled.  If something else (like a snow bank, or you dragging your feet) doesn’t stop you, friction between your sled and the earth will stop you.  Friction is usually less between smooth surfaces, so you may go farther and faster on packed snow than new snow.

Newton’s Second Law provides that the force applied equals the mass of the object multiplied by its acceleration.  This means that greater force is required to move a heavier object, so it is harder to get the sled started when both you and a friend are sitting on it.  This also means that the greater the force applied, the faster you will go, so a push from a strong adult may get you moving faster than you can go by pushing off yourself.  Have fun!