The Lab is open on Friday, January 27th! Purchase tickets online to save $2! 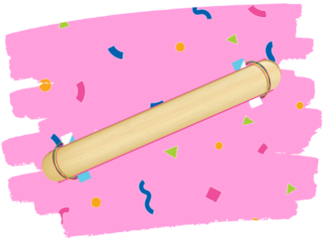 Celebrate the new year with this fun DIY noise maker!

1. Cut your paper so you have a strip that is the same length (long side) and width (short side) as the craft sticks.

2. Layer your craft sticks and paper so they resemble a stick and paper sandwich. Then, wrap a rubber band around one end. Make sure the rubber band is tight.

3. Cut the straw to get two pieces who’s length is the same as the craft stick’s width.

4. You may need a partner’s help for this part. Open the sticks and slide one of the straw pieces in between the sticks, with the paper on the bottom. Slide it all the way to the rubber band.

5. Then, slide the other straw piece to the middle making sure the paper is on the top now. Wrap the other rubber band around the open end.

You have completed your build! Now, just blow air in between the sticks and hear what happens.

What’s happening? Sound waves cannot be seen and unlike light waves, they need a medium through which to travel (like air!). There are all kinds of sounds! High and low sounds, soft or loud sounds, soothing sounds, harsh sounds, are all different, but all sounds begin with vibrations.

When something vibrates it gives off sounds. Sometimes the vibration can be seen, but other times it cannot. When you blow air between the sticks, it causes the paper to vibrate. As the paper vibrates, the sound waves carry through the air to your ears and everyone else's!