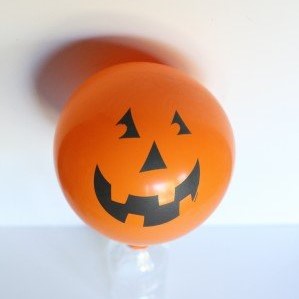 Leaves are changing, temperatures are dropping and it’s pumpkin season! To celebrate the magic of seasons and the approach of Halloween, here’s an experiment that can be done at home. This experiment calls for orange balloons to match pumpkins, but you can find pre-printed ones with jack-o-lantern face or other Halloween themed will also work.

-       Orange Balloons (For some added October fun, use jack-o-lantern or ghost balloons!)

Note: Don’t use a permanent marker to draw a face on the balloon - if the balloon touches anything, the marker may rub off.

2.     Dry the funnel, and then use it to add about 2 Tablespoons of baking soda into the balloon.

4.     Lift the balloon so that some of the baking soda from the balloon falls into the vinegar in the bottle.

5.     Step back and watch what happens. The chemical reaction taking place in the bottle will inflate the balloon!

When baking soda and vinegar are mixed together, the hydrogen ions in the vinegar react with sodium and bicarbonate ions in the baking soda. This makes two new chemicals called carbonic acid and sodium acetate. Then, the carbonic acid begins to decompose into water and carbon dioxide gas which rises to the top of the mixture. This gas fills the balloon “like magic.”