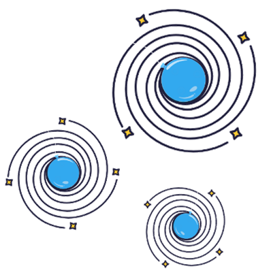 Did you know that the Universe is expanding right now? Right under your feet? 13.8 billion years ago a tiny explosion happened, the Big Bang. The Big Bang, like an explosion, got bigger and bigger, creating our Universe. But even today, our Universe is still getting bigger.

When astronomers, or people who study space, look into the sky, we see that everything is moving away from us, and the further away it is, the faster it is moving away from us. This is called Hubble’s Law. Edwin Hubble, the scientist who created Hubble’s Law, also tells us that there is no center to our Universe because the space between our galaxies is equally expanding. This is hard to understand in words, but using a balloon as our Universe, we can see it in action.

the same as your first Milky Way.

What happened when you measured the distance between the balloons? It might look like the Milky Way is the center of the Universe as everything moves away from it, but when you do it a second time, you should see that no matter what other galaxy you pick as your Milky Way, they all look like they’re the center.

If you got someone else to blow up your balloon, you’d see that no galaxy is the center, but they all move away from each other at the same time.