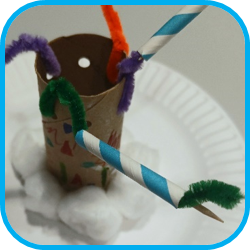 Coral reefs are like the rainforests of the ocean, as they are home to a wide and diverse range of species. These reefs are made up of polyps, or individual coral organisms. Coral polyps are tiny and soft-bodied with a hard base made up of a protective limestone skeleton. This forms the structure of coral reefs, which begin when a polyp attaches itself to a rock on the sea floor, and divides into thousands of more coral polyps. As colonies of coral polyps grow, they join with other colonies and become reefs, some of which have been growing for over 50 million years!

Procedure:
1. Using the hole puncher, punch 5-6 holes at the top of the cardboard tube.
2. Glue your cardboard tube to the paper plate. The plate represents the ocean floor.
3. Attach pipe cleaners to the top of the cardboard tube, through the holes you punched earlier. These are the tentacles of your coral!
4. Add life – zooxanthellae! Color dots and other shapes all along the cardboard tube.
5. Glue cotton balls all around the base of the cardboard tube, where it attaches to the plate. The cotton balls represent the calcium carbonate skeleton of the coral that helps it stick to the ocean floor!
6. Defense mechanisms: Give your coral polyp a way to defend itself or catch its prey by adding nematocysts, or stinging cells. Cut a small piece of straw, and place a toothpick in it. Slide the straw and toothpick down onto one of the tentacles. The toothpick will be the harpoon like barb that is shot out from the tentacle in response to movement or chemical changes in the water.

Explore more! The polyps themselves are translucent, but they get their bright color from billions of zooxanthellae algae that live inside the coral. The zooxanthellae help give the coral nutrients through the process of photosynthesis, as most reefs are close enough to the surface of the ocean to get light from the sun. Corals can also use their tentacles to grab and eat zooplankton and even small fish.

Corals, along with anemones and jellyfish, have a special adaptation of stinging cells, or nematocysts, that are triggered by touch and contain toxins to sting fish or other potential predator/prey.

Coral reefs are at risk due to overfishing, physical damage from swimmers and boats, coastal development, and climate change, which makes the water too warm and too acidic. We can help coral reefs by reducing, reusing, and recycling to stop pollution! We can also reduce fossil fuel emission associated with climate change and help spread the word to friends and families to save coral reefs!