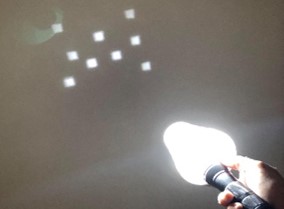 There are a few hundred billion stars in our galaxy with each star being about 1-10 billion years old. When stars are grouped together, we call them constellations. Hundreds of years ago, before humans even knew what stars were, they made up stories about the shapes they would see in the night sky. One of the most famous constellations is Orion, a legend of a mighty hunter that comes from Greek mythology. You may have seen part of the Orion constellation known as Orion’s belt, a smaller grouping of three stars in a row, in the night sky! In this activity, you will be creating your own constellation and build a tool to view it inside your own home!

2. Draw an outline of your constellation with the stars only.

3. Using the black marker, color the bottom of the cup.

4. Using a toothpick, poke holes in the bottom of the cup to represent the stars in your constellation.

5. Turn off the light and place a flashlight inside the cup. Watch as the light projects “stars” onto your wall!